Reflect on Your Project’s Performance Using the Restrospective 4Ls

After a project or a sprint, it’s always a good practice to pause and review. When it comes to managing projects, there’s always room for improvement. The 4Ls retrospective is a useful tool for teams everywhere because it enables them to highlight the positive elements and understand the negative, allowing people to use these lessons to benefit future projects. 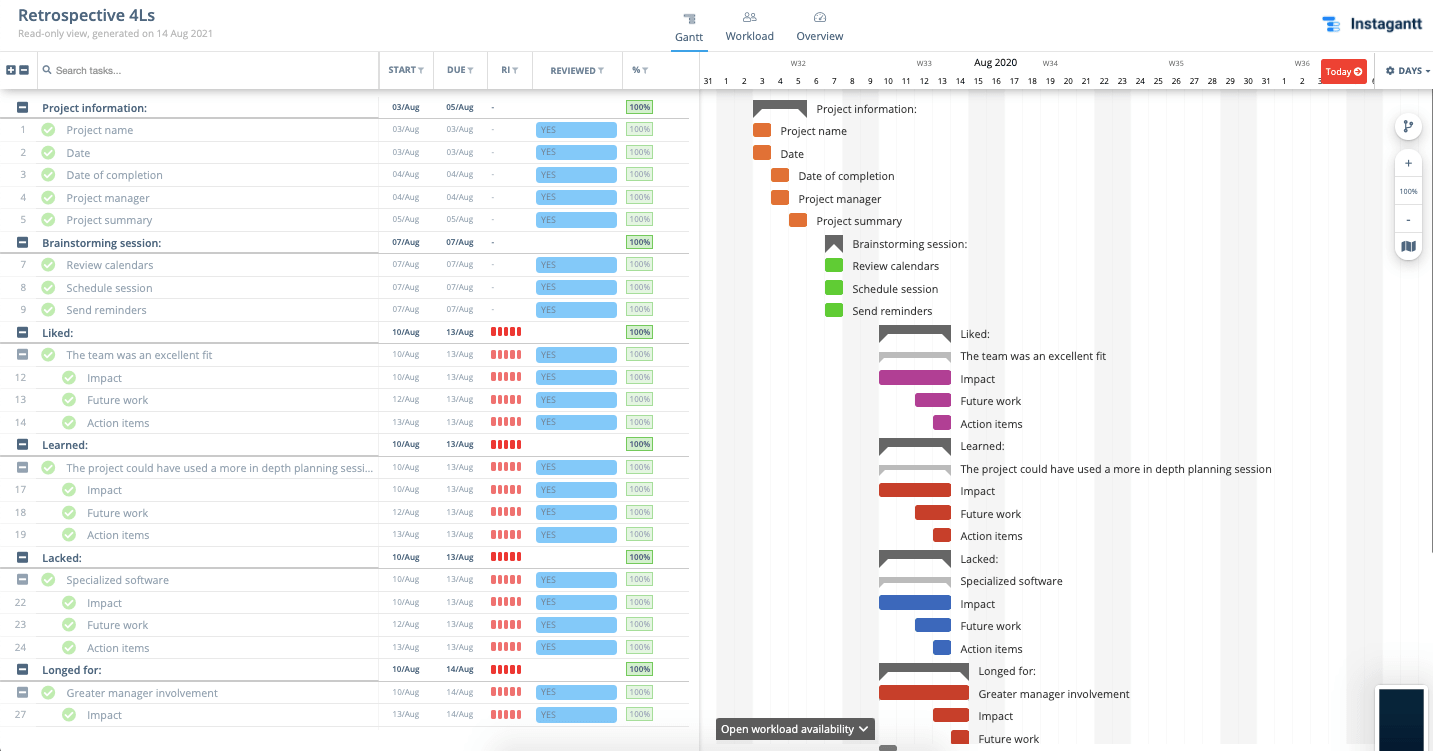 What Is the 4Ls Retrospective?

4Ls retrospective refers to a brainstorming technique used by project managers and teams to review their progress and identify ways to improve. In project management, this process is performed as a conversation or a meeting typically held after a project has ended, in which people look at a particular project in retrospect.

During this activity, teams ask different questions (similar to a traditional agile retrospective) designed to understand what worked, what didn’t, and what can be improved. It’s important to know that in this brainstorming technique, the 4Ls stand for liked, learned, lacked, and longed for.

Benefits of the 4Ls Retrospective

Unlike other agile techniques, the 4Ls require no special training or equipment to perform. During this activity, questions are asked using a personal approach, which results in a more profound focus on a team’s vision, attitude, and motivational factors surrounding a project.

Liked – What did the team like about this project?

Learned – What did the team learn during this project?

Lacked – What did the team lack during this time?

Longed for – What does the team long for?

This technique is commonly used by product teams, project managers, and software development teams, however, it can also be very useful for teams that need to improve their performance, or managers in need to review training performances or employee’s performances over time.

Given its simplicity, the 4Ls can help teams to

Overall, the 4Ls retrospective focuses on action and improvement, and its goal is to help build trust, improve morale, and increase engagement in a team.

How to Run a 4Ls Retrospective

Before starting the retrospective, team members should fully understand its purpose and value. It’s the facilitator’s job to ensure everyone is on board and ready to participate.

Step 2: Determine what was liked about the project.

The first item is intended to uncover what people liked about the project. It’s the facilitators’ job to help the team go over the specific reasons for why a particular thing was liked, in order to ensure it happens again during the next project.

Step 3: Determine what was learned during the project.

It’s very common that, after a project is finished, the good things are praised, but the bad things are not mentioned. The 4Ls technique recognizes the bad as the most valuable lesson: teams can learn from mistakes made, and overcome these same challenges in future projects. In this second step, it’s the facilitators’ job to ensure teams understand that no learning is too small to share, and no mistake is too bad to share. Share, reflect, and analyze the findings.

Step 4: Uncover what was lacked.

Similar to mistakes or challenges, teams tend to hold back when it comes to discussing what was lacked during a project. The goal of this step is to uncover everything that held the team back during the project, which can be a variety of things: from a slow internet connection to software that wasn’t purchased. Uncovering what was lacked helps to ensure teams don’t run into the same situations in any upcoming projects or tasks.

Step 5: Document what was longed for

Run Your Next 4Ls Retrospective With Instagantt

The 4Ls retrospective is a phenomenal tool that you can use when you need to gather data on both positives and negative elements at the end of a project. But for the team to share their experience and focus on improving the future, it’s critical to have all members involved. And even when working with non-distributed teams, it can be difficult to get everyone together at the same time and even share the important information that was discovered during the activity.

Luckily, online project management software like Instagntt solves all of these problems and provides a platform that everyone can use. Instagantt is an online Gantt chart software for project management that helps teams all around the world plan, coordinate, schedule, and execute their projects, from beginning to end. And this includes performing and documenting 4Ls retrospectives. Teams can rely on Instagantt to create professional-looking Gantt charts in a matter of minutes and to manage their work efficiently by being able to visualize relevant project-related information such as deadlines, resources, and budget, and to keep tasks, conversations, and documents in a single, centralized location.